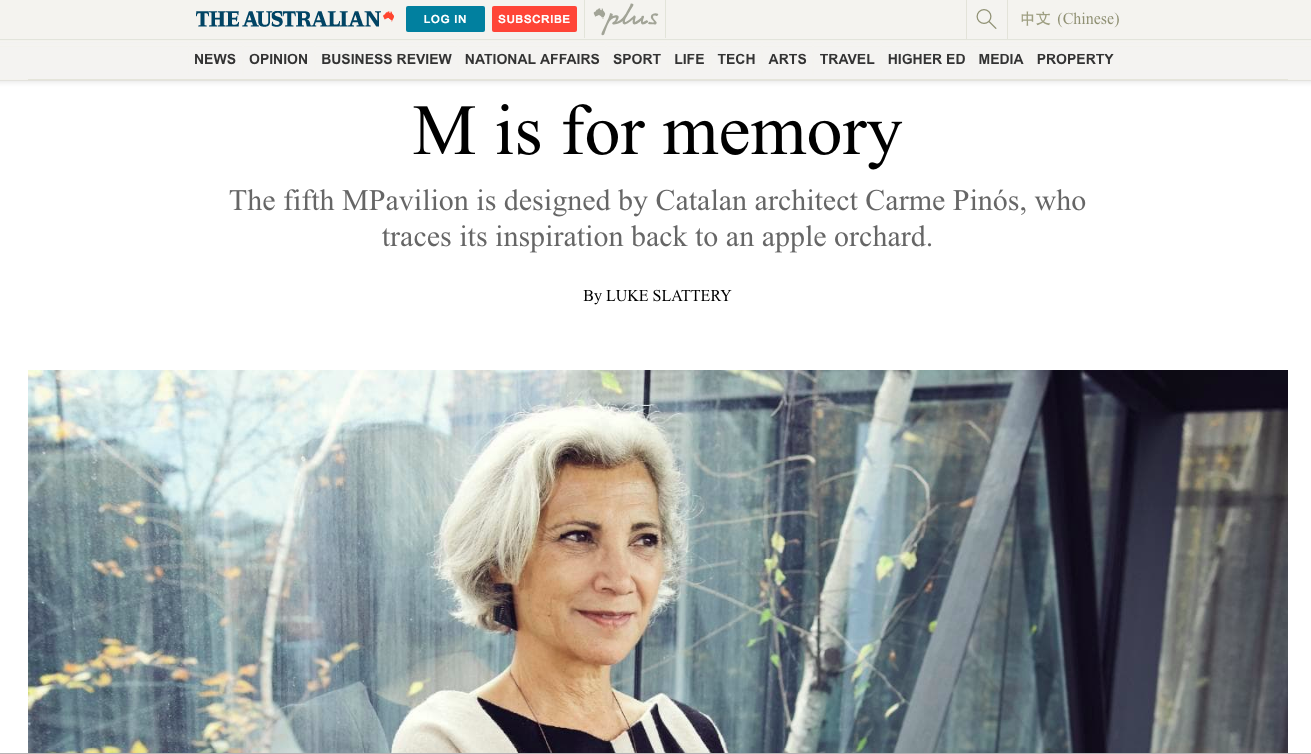 It was an awe-inspiring moment on a warm Melbourne spring evening—and the world media knew it. The opening of the majestic and conversation-starting MPavilion 2018, designed by Barcelona-based architect Carme Pinós of Estudio Carme Pinós, drew a huge amount of press coverage here at home and around the globe, from Europe and the UK to Asia and the Americas.

Wallpaper* UK noted that “the pavilion’s timber and steel shapes seem to unfold” in the gardens, and that Carme’s vision “highlights the [MPavilion] project’s overall ongoing commitment to ‘building communities and women in leadership’”. Australian Financial Review praised Carme’s design as a “concise distillation of her design philosophy, which advocates community, inclusiveness and universal connection”.

Read a selection of press from around the world below.

“In a nod to Pinós’ passion for inclusive and engaging, community-focused architecture—which highlights the project’s overall ongoing commitment to ‘building communities and women in leadership’—the architect imagined the space as a set of wings that ‘open’ the pavilion to the city.”

“Pinós’ MPavilion can be read as a concise distillation of her design philosophy, which advocates community, inclusiveness and universal connection. An open-sided geometric composition of slatted timber planes, it appears wing-like, seeming to flutter lightly upon its garden setting. Transparent polymer panels are designed to turn summer rain into a water feature as it streams down the facade.”

“Pinós’s Melbourne pavilion, with its subtle origami-like planes, achieves a folded paper effect. But the architect prefers a more rustic simile, likening the fall of light and shade to a forest canopy… To her mind the best cities are social environments. ‘It is the job of city to socialise. Good cities are big meeting places constructed from small meeting places: streets, parks, promenades, plazas.’” 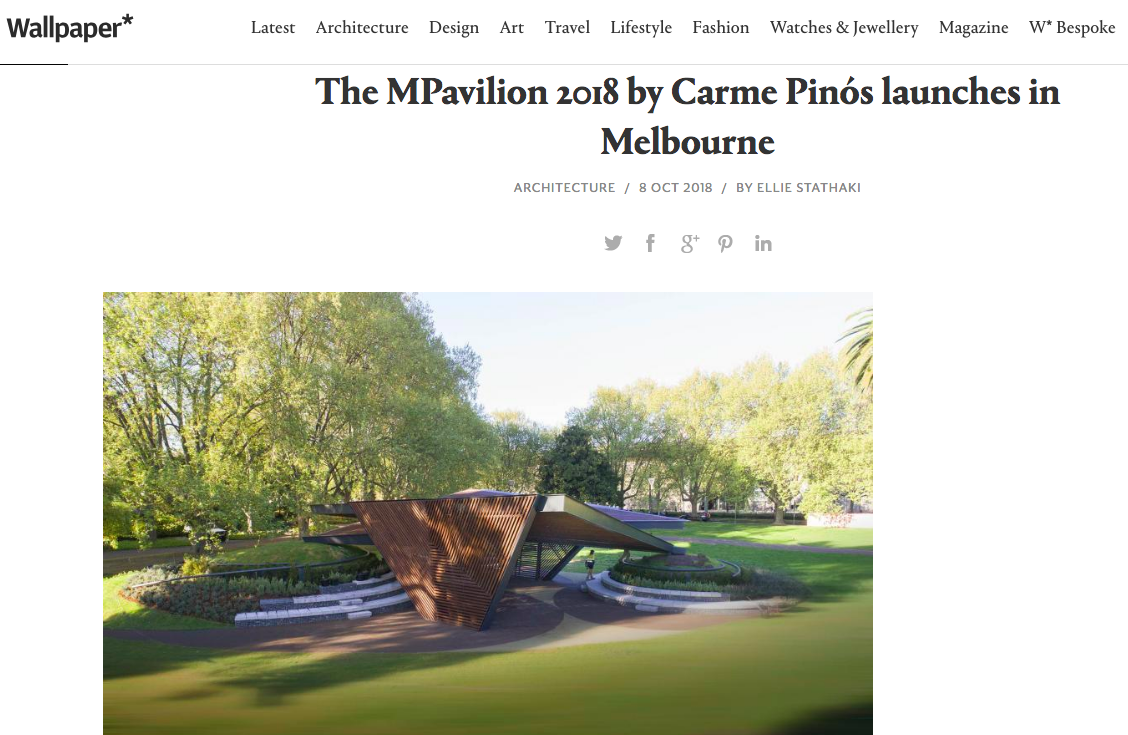 “Some of these triangular screens meet the ground. Others are raised up atop three manmade grass mounds, which are framed by plants and seating. According to the design team, the aim was to make a structure that allows ‘a multitude of community-focused activities to unfold’ inside, rather than to design a statement pavilion.”

“This year the Aussie take on the UK-born concept enlists the talents of Spanish architect Carme Pinós; she has delivered a powerful statement on how to make our cities more inclusive, creating an origami-inspired structure purpose-built to facilitate the gathering of people. Talks to be held in the space will focus on women in leadership, which is part of a global push for gender parity in the largely male-dominated profession of architecture.”

“This year’s design presents dichotomies in a variety of manifestations. It is both strong and striking in its form while creating a subtle softness through the dappled light that filters through the timber slatted roof.” 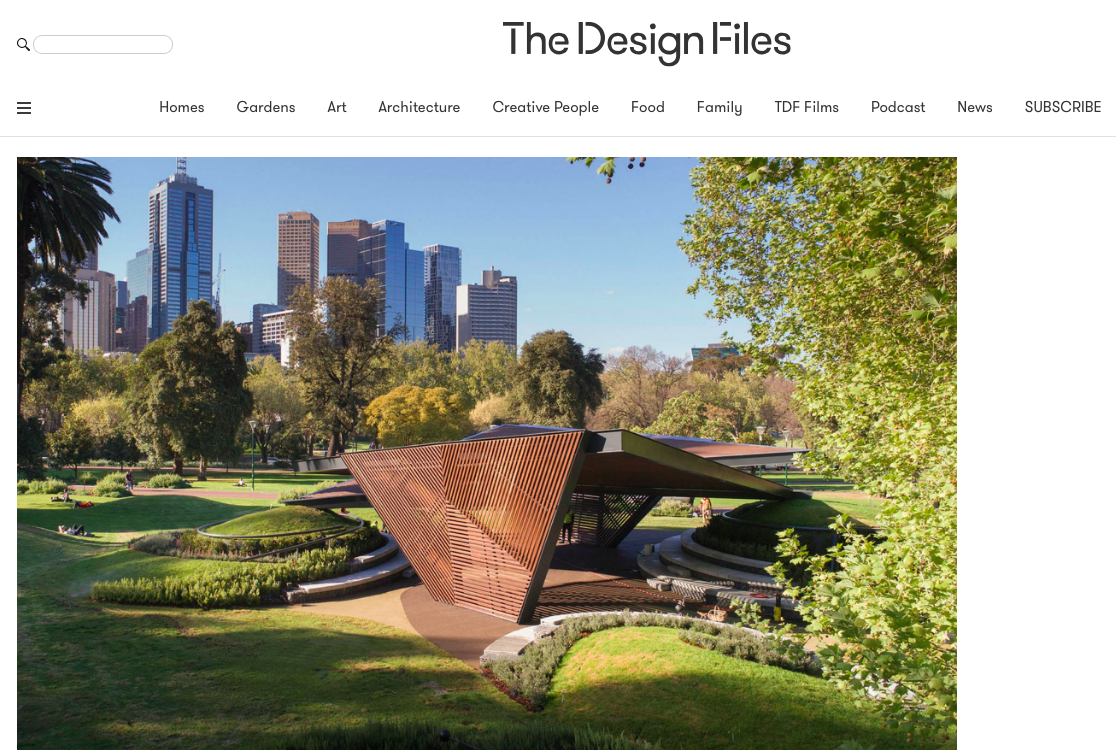 “The geometric composition intersects to form the pavilion’s roof, while an altered topography forms three mounds that incorporate a range of seating opportunities. Pinós has also designed a birch plywood stool, which will populate the pavilion for the months to come.”

“This year’s design, from Spanish architect Carme Pinós, takes its inspiration from origami, with wings opening out to welcome the city into the pavilion itself.”

“The pavilion is the first public project by a female Spanish architect in Australia and the fifth in a series of annual architectural installations commissioned by the Naomi Milgrom Foundation, which began in 2014 and have been confirmed up to 2022. Pinós said the design of the pavilion expresses her observations of the garden’s natural setting.”

MPavilion is an initiative of the Naomi Milgrom Foundation in partnership with City of Melbourne, State Government of Victoria through Creative Victoria, and ANZ. MPavilion 2018 is open in the Queen Victoria Gardens, Southbank Arts Precinct from Tuesday 9 October 2018 to Sunday 3 February 2019.