Carme Pinós is one of the world’s leading architectural voices, with projects spanning public architecture, social housing, urban refurbishment and furniture and object design. Carme established Estudio Carme Pinós in 1991 following international recognition for her work with the late Enric Miralles. Since then, celebrated projects such as the CaixaForum Cultural and Exhibition Centre in Zaragoza (Spain), the Regional Office of the Generalitat in Tortosa (Spain), the Cube Office Towers I and II in Guadalajara (Mexico), the Crematorium in the Igualada Cemetery (Spain) and the Department Building of the Vienna University of Economics and Business (Austria) have foregrounded Carme’s distinctive interest in folded materials, architectural storytelling and humanism.

Regional Office of the Generalitat in Tortosa, Spain. Photo by Jesús Arenas.

Adding significantly to transnational dialogues on community and urban liveability, Carme values experiential volumes over signature heroic buildings. Her philosophy is one of inclusive social interaction with and within her designs. “Whenever I can, I design places where movements and routes intersect and exchange, spaces where people identify as part of a community, but also feel they belong to universality,” Carme has said of her practice. Material and form shape a visual language that also connects Carme’s work with fashion design—in her youth, Carme combined her studies in architecture with that of dressmaking.

Carme is the 2016 recipient of the biennial Berkeley-Rupp Architecture Professorship and Prize awarded by the University of California, Berkeley CED for her contribution to advancing gender equity in the field of architecture. The prize also recognises architects whose work exhibits commitment to sustainability and community. Carme’s CED residence in 2018 investigates a new architectural intervention in Burkina Faso, developing ways to implement research led by architect Albert Faus into the potential for low-cost, sustainable thermal insulation derived from peanuts grown in the region almost exclusively by women.

Crematorium in the Igualada Cemetery, Spain. Photo by Jesús Arenas.

Combined with her work as an architect, Carme has been a guest professor at higher education institutions worldwide, including Columbia University in New York; Università Iuav di Venezia in Venice; the Kunstakademie in Düsseldorf, and Harvard University’s Graduate School of Design. As well as the Berkeley-Rupp Architecture Professorship and Prize, in 2016 Carme was awarded the Richard J. Neutra Medal for Professional Excellence in recognition of her career. In 2015, she received the Creu de Sant Jordi Medal by the Catalan Government, a high civil distinction awarded for cultural and social services. 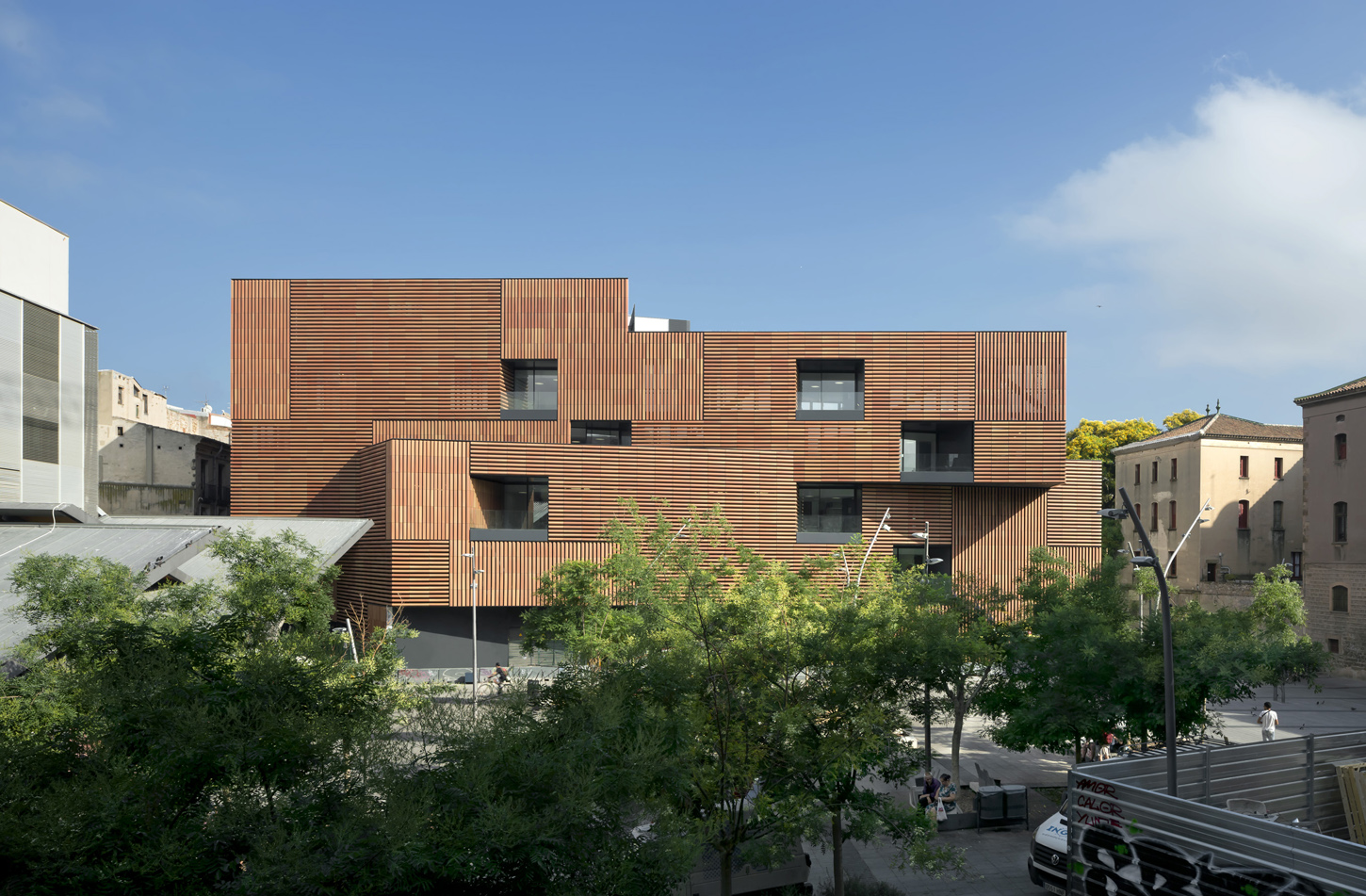 In addition to MPavilion 2018, recent and current projects by Estudio Carme Pinós include the architectural set composed by Gardunya Square, Massana School of Arts, a housing block and the west façade of the popular La Boqueria Market in the Historical District of Barcelona (Spain); the Rio Blanco Pavilion in Guadalajand the masterplan for the historic centre of Saint Dizier (France), where Carme is also carrying out a series of interventions in public spaces. 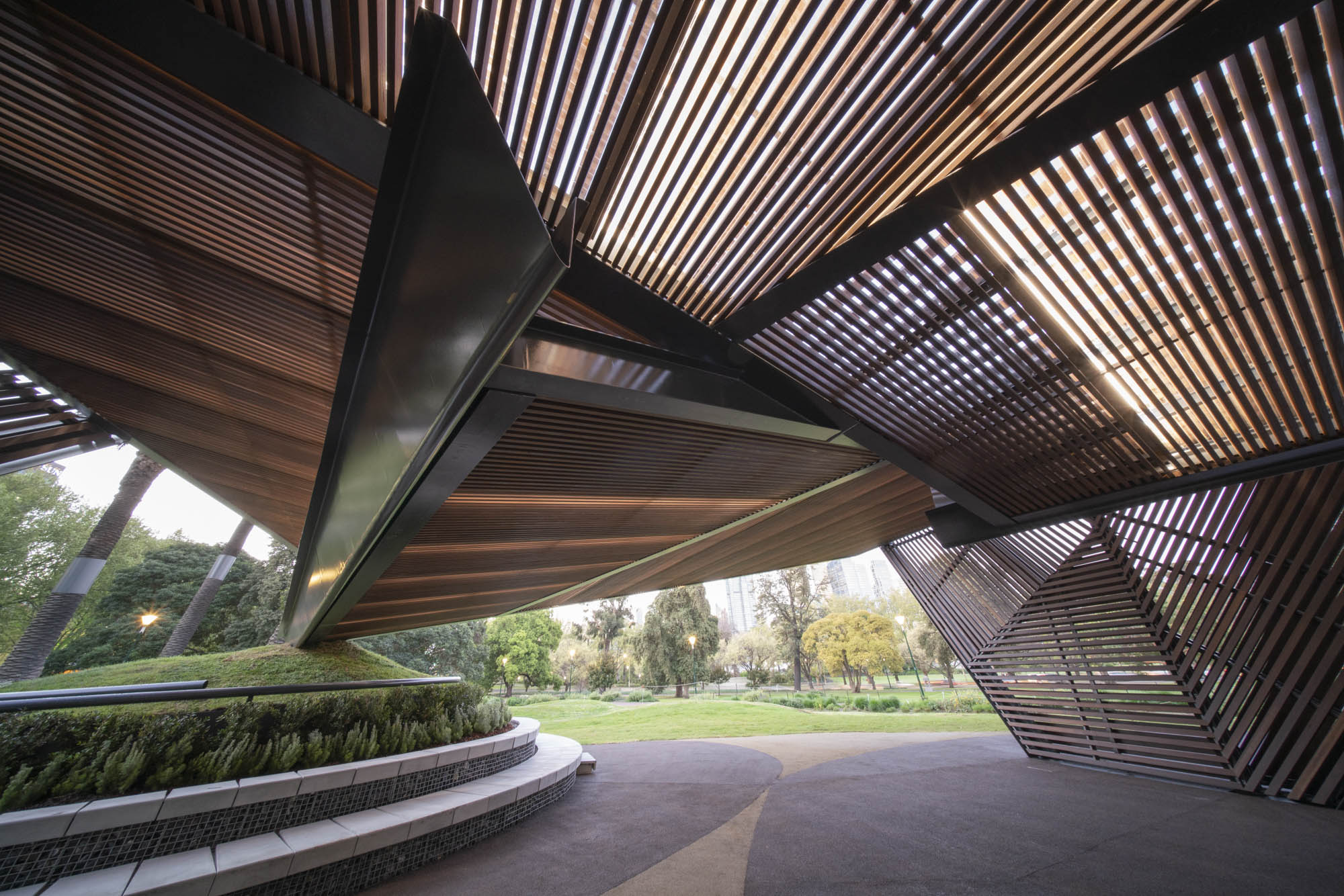 Carme’s sharp and poetic design for MPavilion 2018 reveals an open civic space that invites interaction as well as a discourse between people, design, nature and the city. The design incorporates floating planes resting at angles on elevated points within the park, connecting the MPavilion to the city. The structure’s interconnected shapes bring to mind folded materials such as origami. Dissolving the lines between architecture and urbanism, an ease of relationships is suggested—material, environmental and human. 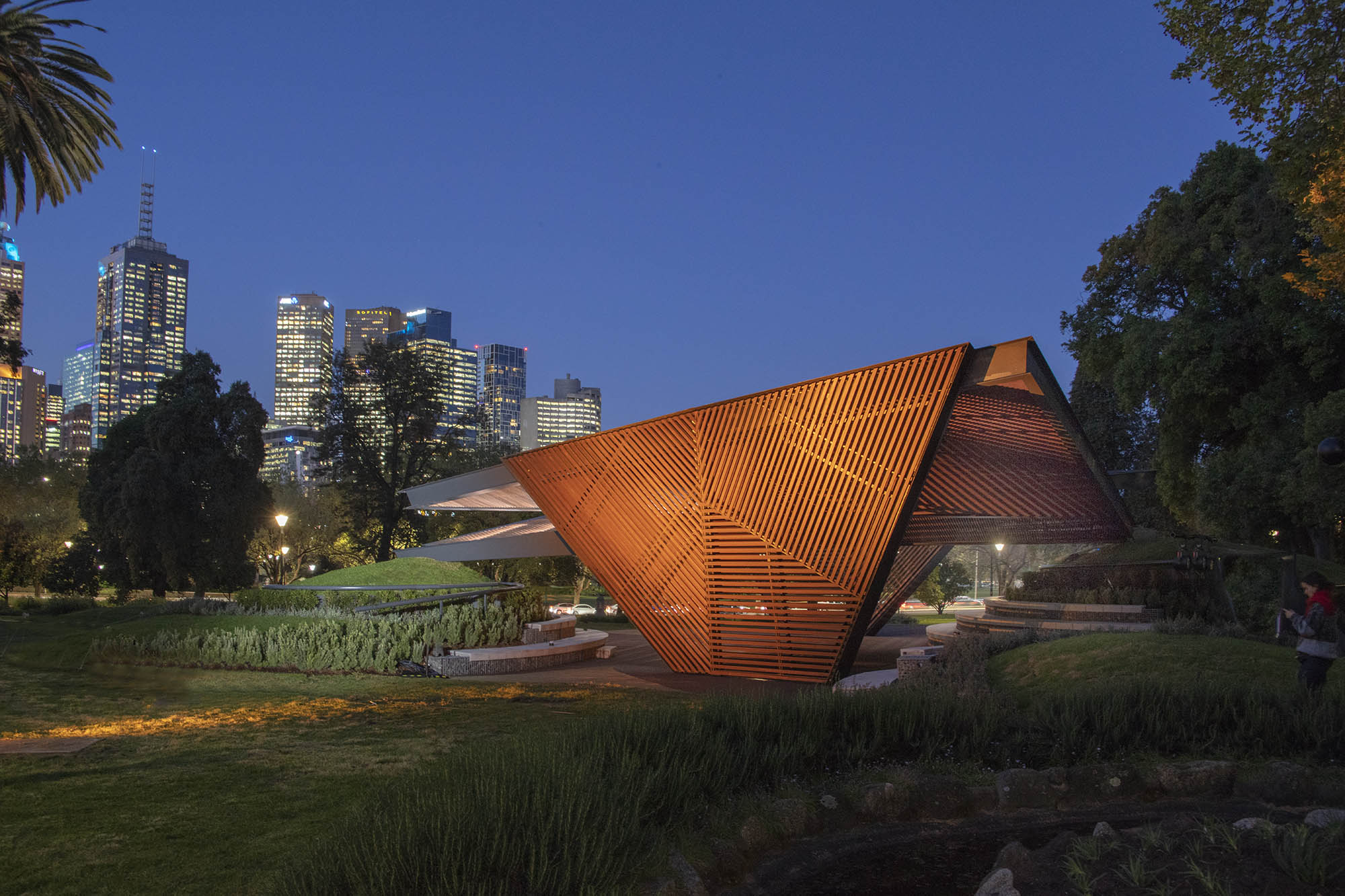 The MPavilion itself is a geometric configuration assembled in two distinct halves supported by a central steel portal frame. Two surfaces of timber latticework intersect with each other to form the pavilion’s roof. An altered topography forms three mounds that incorporate seating, allowing a multitude of experiences: dynamic, spontaneous and collective.

Commenting on her commission for MPavilion 2018, Carme said: “It is my honour and pleasure to have this opportunity to design a new pavilion for the Naomi Milgrom Foundation. It is a great responsibility to create a unique place in this special park with views over Melbourne—a city to which I have deep attachments. I am inspired by the fact that this new project will become a cultural destination for the city.”

Watch Carme speak about her design for MPavilion 2018:

MPavilion 2018 will be a protected space for social activities within the city but also a place to experience with all the senses. The pavilion establishes a relationship with nature and the surrounding park, where we will feel the sun’s path through the game of shadows created by the pavilion’s skin, and where on rainy days we see the water run through its transparent roofing.

Like an origami folding, two surfaces of timber latticework bend and intersect with themselves to form a roof. Between the latticework, a transparent layer of polycarbonate protects us from the rain. The structure, made out of metal profiles, allows a fast construction and an easy reconstruction on another site, as it is a temporal intervention.

The altered topography forms three mounds that incorporate tiered seating and create the atmosphere of cover (with storage within). From the tiered seating we enjoy the social activities offered by the foundation, never losing sight of the fact that we are in the middle of a magnificent park.

We will be inside the pavilion, but always feeling as if we are also on a balcony facing nature, and connecting with the surrounding community. 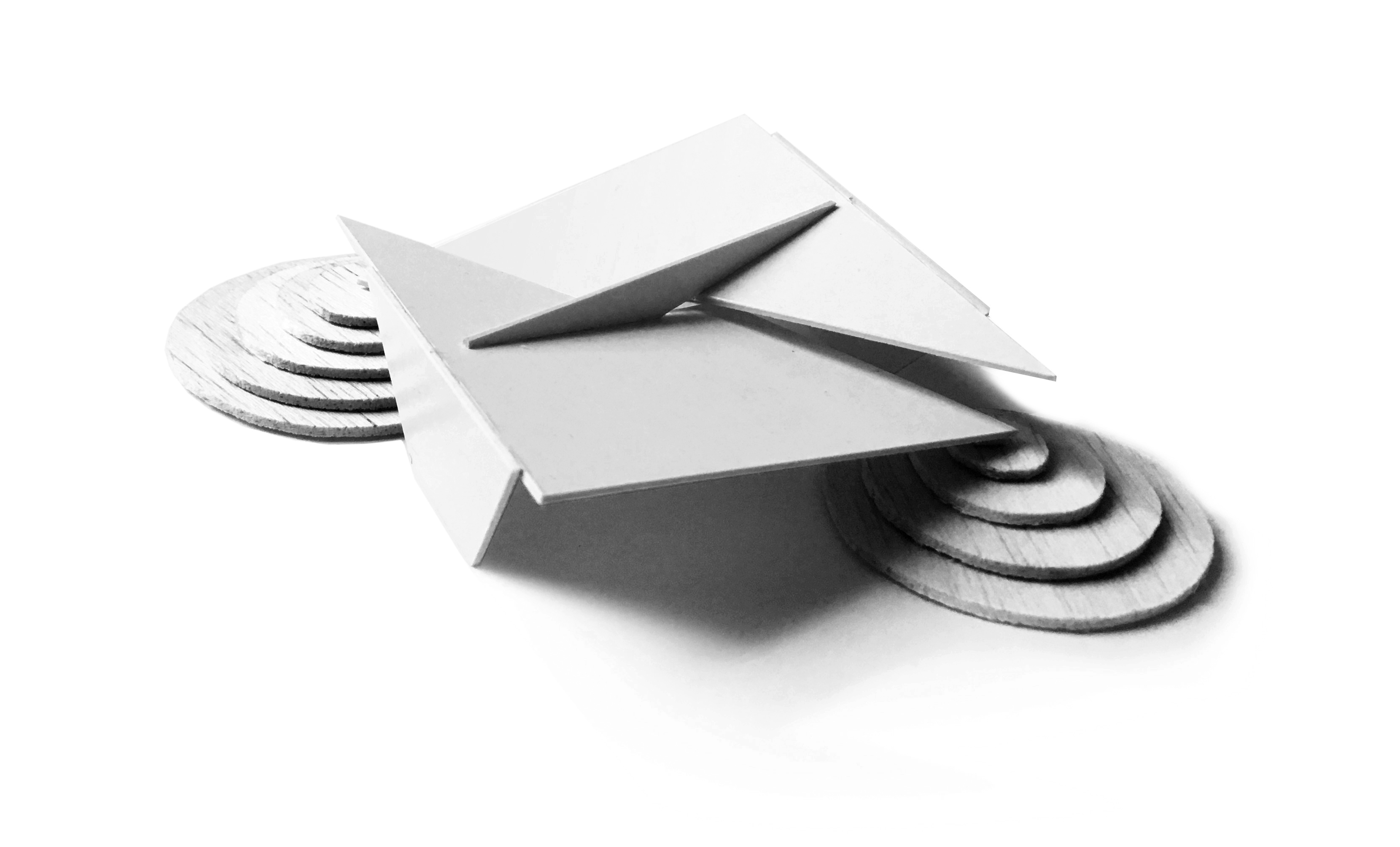